Both Sides Now: Positive and Negative Effects of Changes To Working Arrangements

in News, Technology & future of the workplace
Reading Time: 2 mins read
A A
0

In our previous blog  we looked at the implications of working arrangements on perceptions of culture.

The effects of changed working arrangements were largely considered to be positive, but there are some negative consequences to address.

In the FSCB Survey 2021 we asked two free-text questions about changes to working arrangements in response to the pandemic.  The first asked for those changes which have had positive effects and should be continued or developed further, and the second about changes with negative consequences which should be reversed or amended.  We received over 40,000 free-text responses on this topic and categorised them through a combination of quantitative natural language processing techniques such as clustering, and qualitative techniques such as labelling a small number of randomised responses. 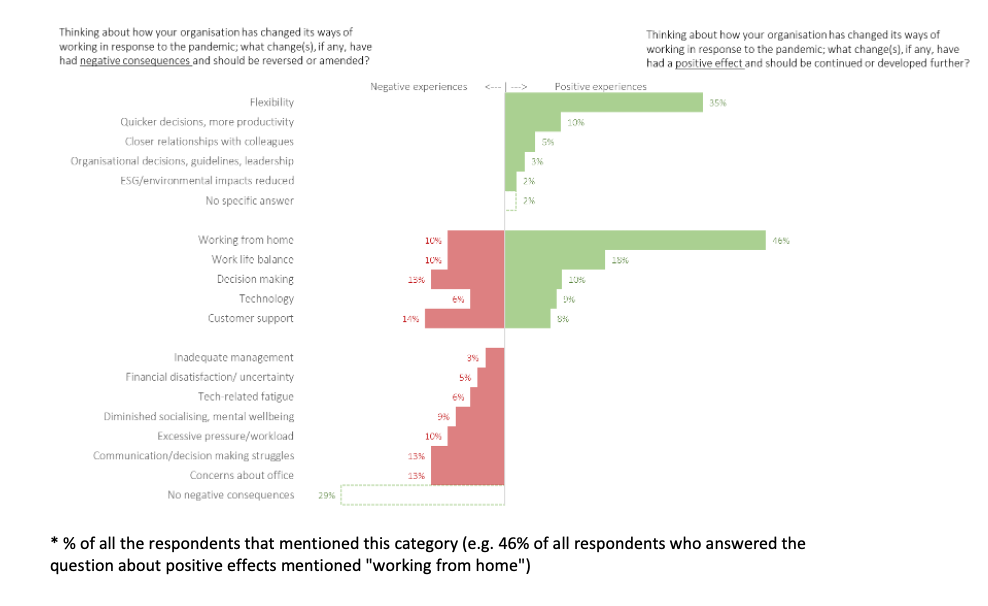 When asked about what changes to working arrangements had negative consequences that should be reversed or amended most employees said that there were no negative consequences.  Where they did mention negative consequences, they mentioned issues with supporting customers, difficulties with making decisions and communicating, blurred work-life boundaries, large workloads and mental wellbeing concerns associated with diminished socialising.

There were some overlapping categories which featured both in responses to the positive effects and the negative consequences.  Working from home was overwhelmingly positive but there were a much smaller number of responses which indicated there were negative effects of this to be addressed.  Work/Life balance also featured in both categories, although again at greater frequency in the positive effects responses.  The picture reverses somewhat for decision making, which was slightly more frequently mentioned as a negative; and customer support which was much more frequently mentioned as a negative consequence of changes to working arrangements.

When we analysed the responses to the core questions of employees who said ‘no negative consequences’, they answered all of these more positively (in a statistically significant way) compared to employees who did not mention “no negative consequences”.  After controlling for other factors, respondents who mentioned customer issues as an either positive or negative consequence of changed ways of working did not tend to answer the customer questions in the core survey more negatively than those who did not mention customer issues suggesting that their responses to the future of work free text questions may have taken the form of an opportunity to highlight concern for customer impacts of new working models rather than a specific indication of harm being done to customers.

Although the vast majority of respondents were positive about their perceptions of the consequences of changes to working arrangements in response to the pandemic, with working from home and additional flexibilities the big wins, there remain issues to be addressed with respect to customer support; decision making; communications and work/life balance and wellbeing.

In our next blog we will take a look at how employee perceptions of the positive and negative effects of changes in ways of working differ across demographic groups.

Inclusion is only half the story: why measuring exclusion matters too

This article was written by Carol Franceschini and Jenny Robinson, Senior Behavioural Scientists, FSCB Insights ‘How can we help our...

On 31st March, the FSCB convened member firms in a roundtable and knowledge exchange on the theme of The Future...

We might have thought that changing working habits would have had more of an impact on working culture after the...

In our previous blog we looked at responses to our free text questions about positive and negative effects of changes...