in Technology & future of the workplace
Reading Time: 5 mins read
A A
0

In this, the first of two parts reviewing the findings from our 2020 data set on Culture in a Crisis, our  looks at how perceptions of culture vary between employees in different workplace arrangements.  In the second part, we will consider how perceptions of organisational responses to the covid crisis vary between demographic groups.

Where did employees work during the coronavirus crisis?

Most, but not all, respondents worked from home during and after the March 2020 lockdown.

In response to the coronavirus pandemic, the “where” of work changed literally overnight for many within the industry. 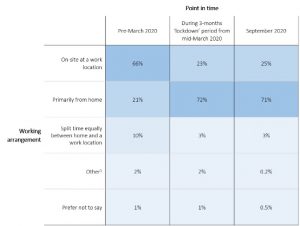 However, employees in different business areas had different experiences around where they worked in 2020.  Our respondents who reported working in on-site locations were primarily branch based.  71% of Retail Branch respondents worked on-site throughout the lockdown period, rising to 81% by September 2020.

Commercial banking and Functions employees largely worked from home (95% of both groups during the three month pandemic period, with little change by September 2020).

In Investment Banking, the highest proportion of on-site workers was in Markets (12% during the lockdown period, rising to 24% by September) but Global Banking (including M&A) employees were almost universally home-based with only 1% working on-site both during and after the lockdown period.

How did perceptions of organisational responses to the crisis vary across work locations?

Controlling for other factors, respondents who worked from home were more likely than those working on-site to feel that their organisation had treated employees fairly during the crisis.  They were also slightly more likely to feel that senior leadership had managed the impacts of the crisis well and to be proud that customers, clients and members had been helped during the crisis.  The very small group of employees who indicated that they had been unable to work as a result of the coronavirus crisis, were much more likely than all other groups, including those working from home, to feel that their organisations had treated employees fairly and had appropriately supported their health and wellbeing.

People who didn’t have to work during the pandemic were most likely to think organisational responses were fair, and people who had to work in on-site (potentially customer-facing) environments during the pandemic were least likely to think their organisation’s response was fair.  We might reasonably conclude that judgements of “fairness” are based on personal experience.

How did perceptions of organisational culture, more broadly, vary across work locations?

So, despite on-site workers feeling slightly more negative about how they were treated in the pandemic, do their marginally more positive perceptions of responsiveness and reliability reflect a cultural comfort in continuity in a crisis, or perhaps an appreciation of processes, procedures and physical proximity to colleagues that were familiar in an otherwise changing environment?  Firms considering new models of working, might wish to consider how changes in working arrangements may impact upon employees’ sense of connection to the target organisational culture, and in particular to customer-related elements of it.

Did levels of inclusion experienced by employees differ across work locations?

Individual and organisational inclusion were perceived similarly by those working at home and those in on-site work locations.

In 2020 we asked employees to tell us how much they agreed with the following statements about individual inclusion: “I feel accepted by my colleagues at work”, “I feel that I can be myself at work”, and one on organisational inclusion, “in my organisation, people are able to use their initiative and judgement in carrying out their work”.  We analysed the 2020 Survey responses to see if there were differences in our inclusion measures between employees who worked in different locations.

Irrespective of work location many colleagues were positive in their perceptions of organisational inclusion, with 87% of those working from home and 88% of those working in an office location agreeing that they could use their initiative and judgement at work.  When other factors were controlled for, there were only very small positive impacts of working from an on-site work location on perceptions of organisational inclusion.  Similar very small positive impacts of on-site working on employees’ perceptions of both our measures of individual inclusion – being accepted at work and being able to be themself at work, were observed when other factors were controlled for.

Though onsite workers were less likely to say that their organisation had treated employees fairly during the pandemic than their at home colleagues, they still felt as included at work.  These results provide food for thought when we consider what issues need to be taken into account should firms wish to adopt hybrid working arrangements in future.

In Part 2 of our review of the FSCB’s 2020 data set on Culture in a Crisis, we will look at how perceptions of organisational responses to the covid crisis vary between different demographic groups.  If you’d like to contact us and get involved in our Future of Workplaces workstream arising from this insight, please email: insightsteam@fscb.org.uk

Do employees feel included at work?