Do employees feel included at work?

in Diversity & inclusion
Reading Time: 6 mins read
A A
0

Inclusion, along with diversity, has increasingly been a top priority for many organisations. Along with a clear moral imperative for making this a focus, firms in financial services are increasingly cognisant that inclusive environments lead to better outcomes for their employees and their customers. When it comes to diversity and inclusion (D&I) efforts in organisations, many firms have a range of strategies, policies and initiatives in place which seek to create positive change. Whilst there is no shortfall in well-intended programmes, measuring their impact and learning from them in a meaningful way remains a far greater challenge. An employee’s experience of inclusion in the workplace after all is a deeply personal issue. Only employees can express how they feel: Am I accepted? Am I valued? Do I feel psychologically safe to speak up? And do I feel a sense of belonging? For an organisation to build a better understanding of inclusion, wide-reaching data can have an integral role, and the subjective experiences of employees are an important part of this.

In the FSCB Employee Survey 2020, as well as expanding our approach to measuring diversity by adding new demographic questions (capturing disability and socio-economic status), we also asked a series of additional questions on different aspects of inclusion in the workplace, collecting close to 72,000 responses on these questions. These were:

High-level findings in 2020 on aspects of inclusion, across all respondents in the industry

When controlling for other demographic factors, those employees with a disability answered questions relating to inclusion, including their ability to use their initiative and judgement, considerably more negatively than those without. Nine in ten employees without a disability report both feeling accepted by their colleagues and feeling that they can be themselves at work, compared with only 77% of those with a disability.

When we look at the data from the perspective of respondents’ ethnic group, Black and Asian employees, as well as those from Mixed ethnic groups responded more negatively to individual inclusion questions than White British employees. 91% of White British respondents said that they both feel accepted and that they can be themselves at work, in comparison to 78% of Black respondents. As we know from the data previously collected, Black and Asian employees are more likely to remain silent than their White colleagues when it comes to raising concerns, highlighting the need to improve inclusion practices so that all colleagues feel safe to be themselves and speak openly. In contrast, there was no statistically significant difference between different ethnic groups on being able to use their initiative and judgement, once other factors had been controlled for.

When looking at respondents across different business areas, employees in Investment Banking and Functions responded more negatively on individual inclusion questions than did employees in Retail and Commercial Banking. This pattern between business areas is broadly similar to findings that we have seen on our core Survey questions.

When comparing how the employees who had both agreed that they can be themselves and feel accepted (88% of the industry) had answered the core 36 questions in our Survey with employees who disagreed on both individual inclusion questions (2% of the industry), the difference was striking. The experiences and perceptions of those who feel included and those who do not were profoundly different across all characteristics and clusters of questions within the Assessment Framework, but especially on questions relating to speaking up, wellbeing and being treated with respect. 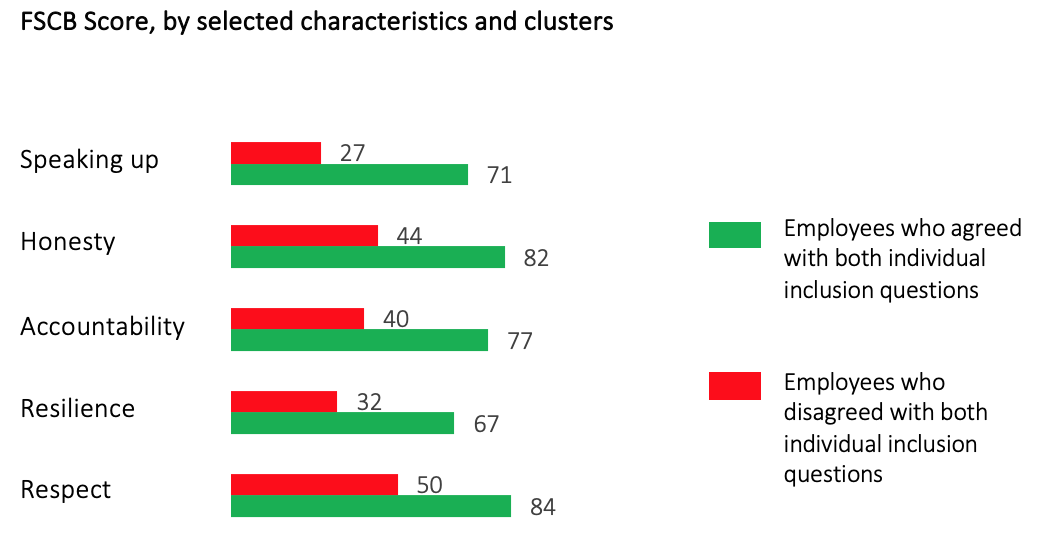 The chart above demonstrates differences in scores on selected characteristics. To illustrate in more detail, 18% of those who agreed with our individual inclusion questions said they would be worried about negative consequences, if they raised concerns, compared with 83% of those who felt neither accepted nor able to be themselves. 86% of those who felt included also felt comfortable challenging a decision made by their manager, compared with 27% of those who did not feel included. While the Survey itself does not enable us to make causal claims about the relationship between speaking up, inclusion and psychological safety – we do know from existing research[3] that these concepts are closely intertwined and that sense of belonging and inclusion is necessary for a healthy speak up culture. While the proportion who reports not feeling included is very small (1,569 employees out of close to 72,000 respondents across the industry), nevertheless, these findings tell us a cautionary tale of the negative consequences from a lack of inclusion.

When asked of three words to describe their organisation, those who felt that they could be themselves and accepted at work used words such as ‘ethical’, ‘supportive’, ‘caring’, ‘flexible’, ‘honest’ and ‘fair’ significantly more frequently than those who disagreed with individual inclusion questions. ‘Unfair’ was the 7th most frequently used word by the 4% of employees who did not feel included, while the word did not feature in the top 150 words by those who felt included. Similarly, ‘political’ and ‘favouritism’ featured in the top 20 words for those who did not feel included, whilst these words were barely mentioned by those who felt included.

What do these results mean for the FSCB and the organisations we work with?

While the aggregate results indicate that most employees report feeling included, there are significant minorities among certain demographic groups that do not. For the industry it is vital to ensure everyone feels included. We know from research[4] that inclusion has wide-ranging benefits to organisational cultures that extend to engagement, productivity, innovation, absence rates and other business outcomes.

The member firms participating in the FSCB Employee Survey in 2020 received their own individual data on inclusion, including breakdowns by demographic data and by business areas, which allows the firms to identify areas of strength, as well as areas for improvement. The FSCB continues its partnership with the members to develop insights and opportunities for interventions to improve the cultural outcomes. Most recently our Change Ambassador programme has trained delegates from six investment banks to conduct ethnographic research in their firms to re-examine their unique social norms around gender equality, diversity and inclusion which may be acting to limit equality of opportunity.

Please get in touch with us to learn more about our work on D&I and to discuss how we can work together to improve inclusion in your organisation: insightsteam@fscb.org.uk.

For a sustainable business, build a resilient culture