As we have already noted in the context of speaking up, diversity — allied to the inclusive culture that allows the benefits of diversity to be realised — matters for business. A now substantial body of research points to diverse and inclusive teams performing better at solving problems, being more creative, having a better understanding of their customers and attracting a wider range of talent, and this is before even taking into account the wider benefits for the economy and society.

Diversity itself has a range of dimensions: demographic (e.g. age, gender, ethnicity, sexual orientation), experiential (what we have experienced, what has shaped us, what we have learned to date) and cognitive (how we think and approach problems). All three are important for organisations aiming to perform as effectively as they can. Diversity is a prize, not a box-ticking exercise. Given the interaction between diversity, inclusion and culture, diversity is also an issue of interest to the BSB.

In 2018 we explored in the BSB Assessment one aspect of one component of one type of diversity — that of equality of opportunity by gender. Gender diversity is not, of course, a new issue in financial services or in business and society more generally. Many financial services firms have now signed up to HM Treasury’s Women in Finance Charter. Launched in 2017, this calls on firms to commit to supporting the progression of women into senior roles and report publicly on progress. Many firms are putting considerable effort into removing obstacles to female representation in senior roles. The scale of the ongoing challenge in even this one dimension of diversity was, however, highlighted in the first annual disclosure of Gender Pay Gap figures in April 2018.

Data is already available to firms from their own internal information on the composition of their workforce and the representation of women in senior roles and at levels just beneath this. What we were interested in understanding better through our Assessment exercise, was how employees perceived gender equality of opportunity within their firm. We explored this both in the Survey and in focus groups; in the former to get a sense of employees’ perceptions, and in the latter to try to understand what might shape these perceptions and distinguish environments that were seen as more equal from those that were regarded as less so. 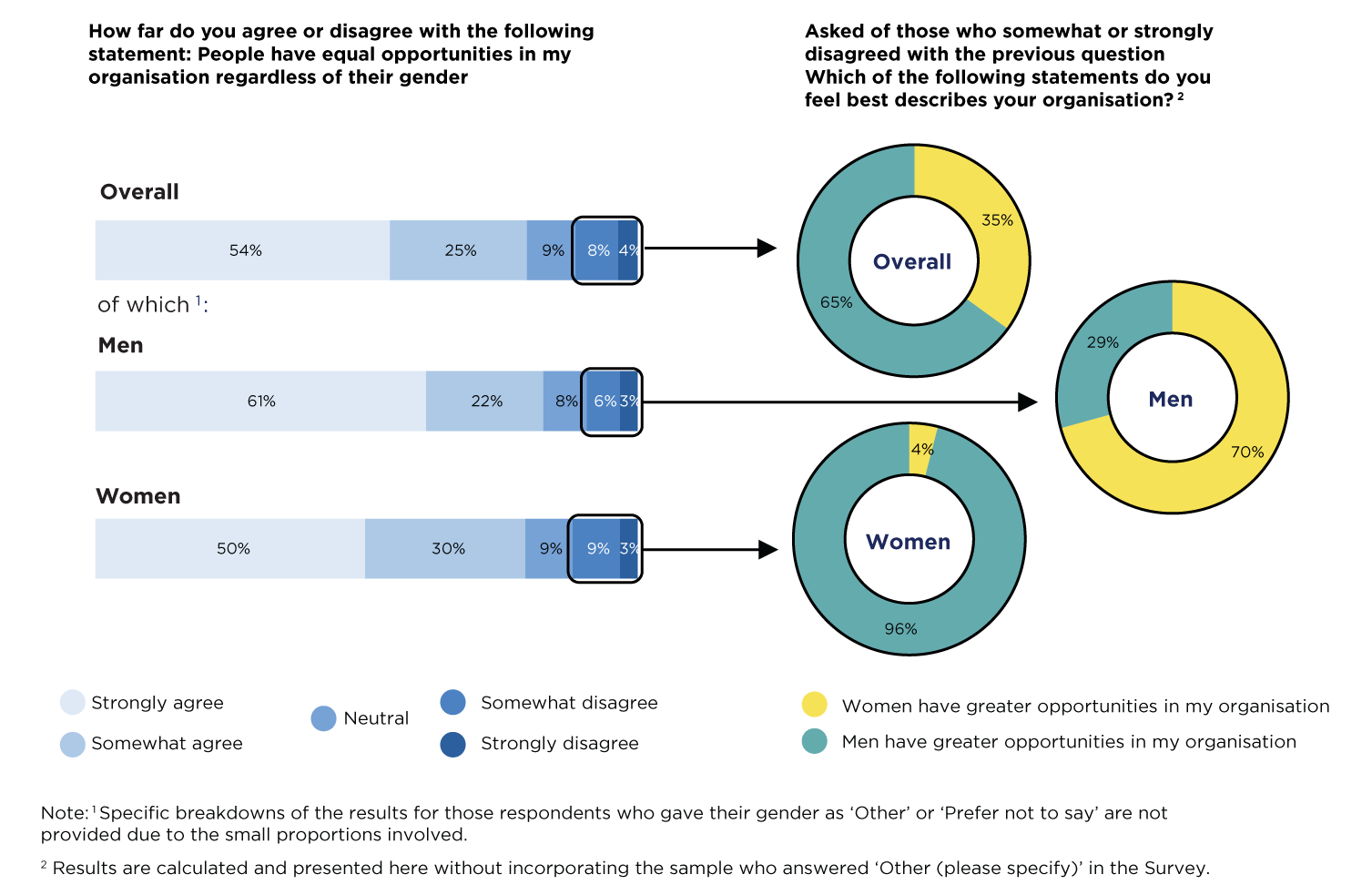 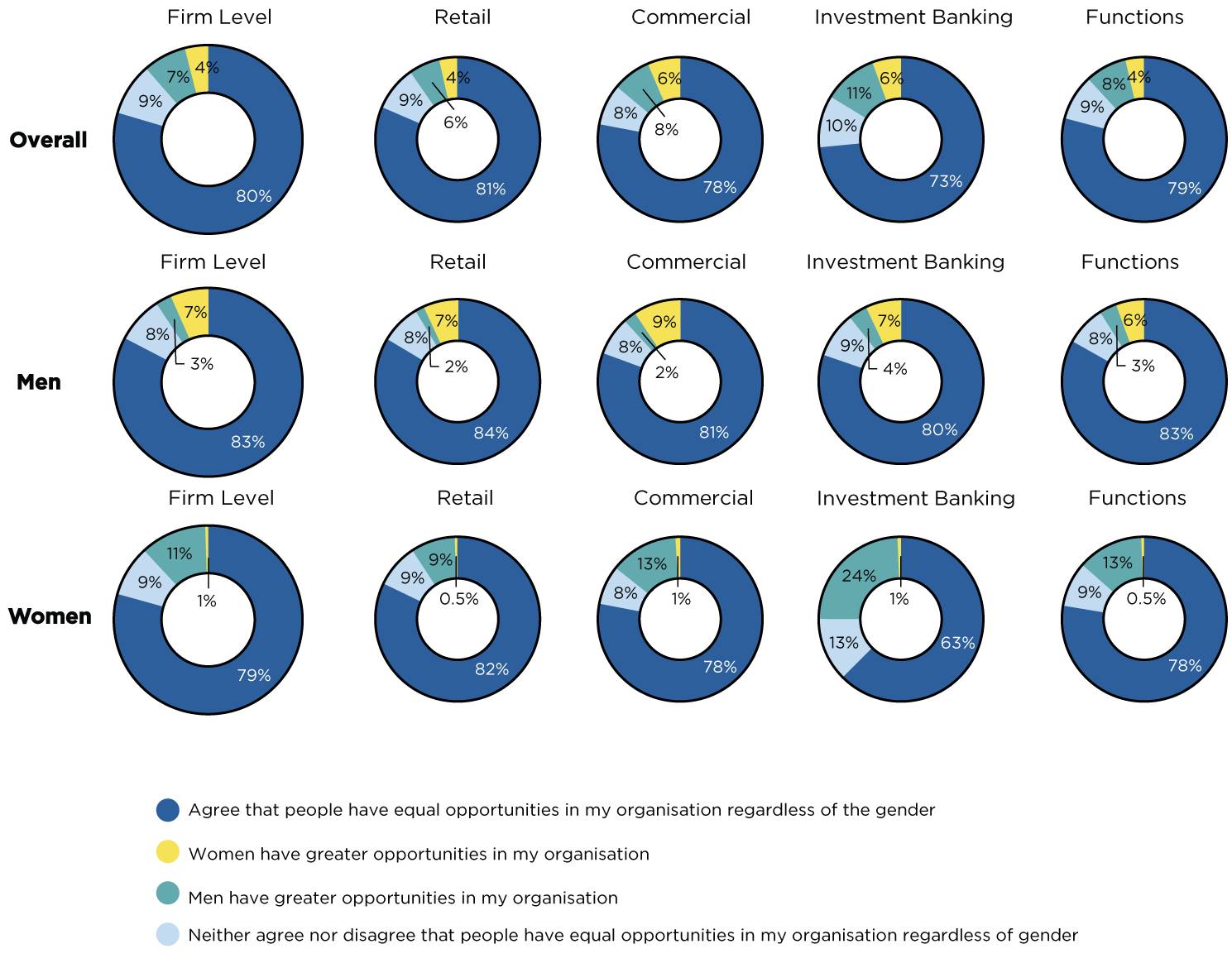 To help us understand better what lies behind these differences in perception and to enable firms to address them, we analysed the Survey data alongside our information from focus groups. To do this we deployed the same ‘grounded theory’ approach first presented in our 2017/2018 Annual Review and summarised in Box 1.

Our aim in this approach is to identify factors that may explain what distinguishes a higher-scoring firm or business area on any issue from a lower-scoring one, thereby helping all firms learn and improve. In this case, we were looking at the issue of gender equality of opportunity.

We start by identifying the business areas in firms (e.g. IT & Operations in firm A) that registered the most and least positive responses to our 2018 Survey question on whether there was gender equality of opportunity at the respondent’s firm. Having found the business areas that fall at either end of the scale (figure 32), we then identified from our qualitative work the corresponding focus groups that were composed of employees from these higher or lower-scoring business areas (e.g. the focus group of employees from IT & Operations in firm A).

Fig 32. Qualitative analysis — choosing focus groups on which to apply grounded theory based on higher or lower Survey scores 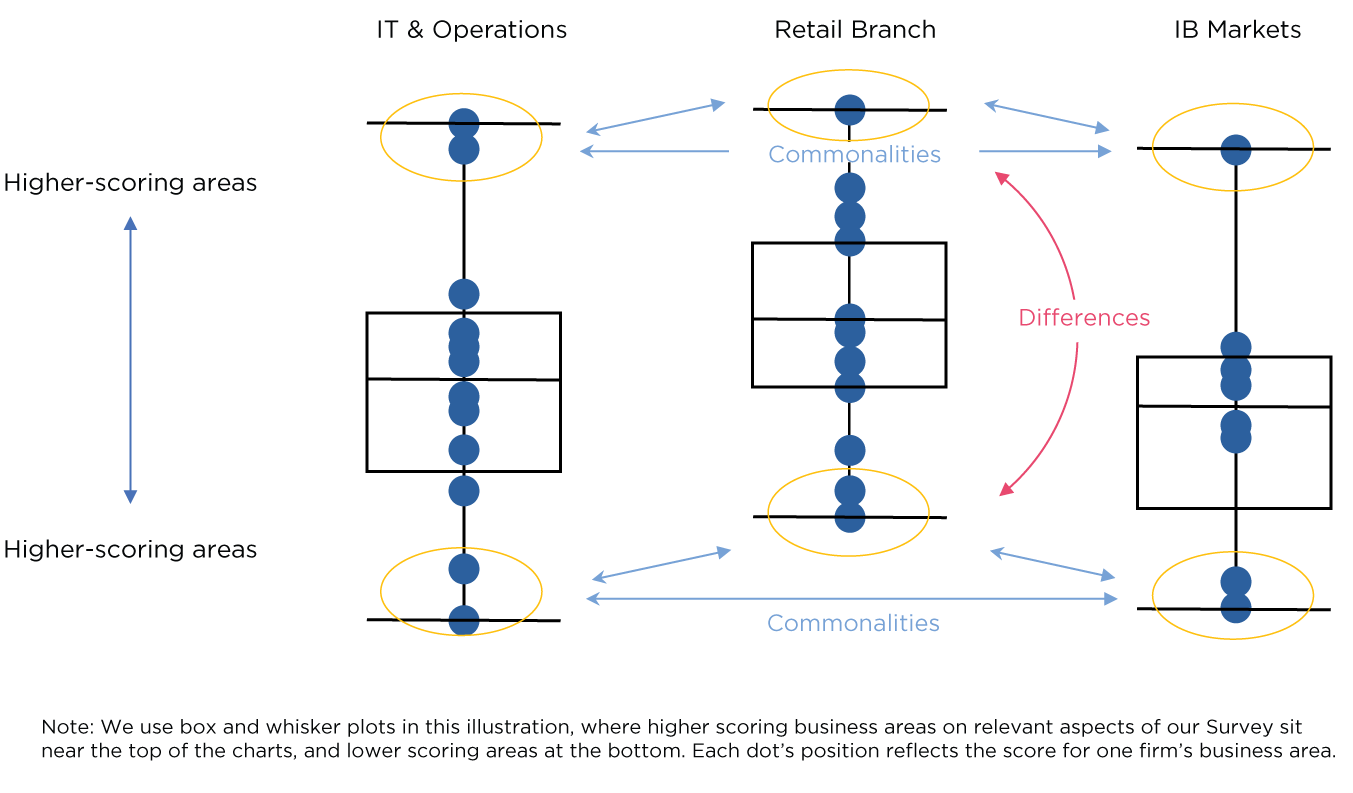 We then analyse what was said in each of the selected focus groups, and code all of the characteristics and practices that are mentioned. By noting the frequency with which different characteristics or practices are mentioned in focus groups from higher and lower-scoring business areas, we can see whether any given practice is strongly associated, associated or not associated with higher Survey scores on a particular question (and potentially, therefore, with good or bad outcomes). 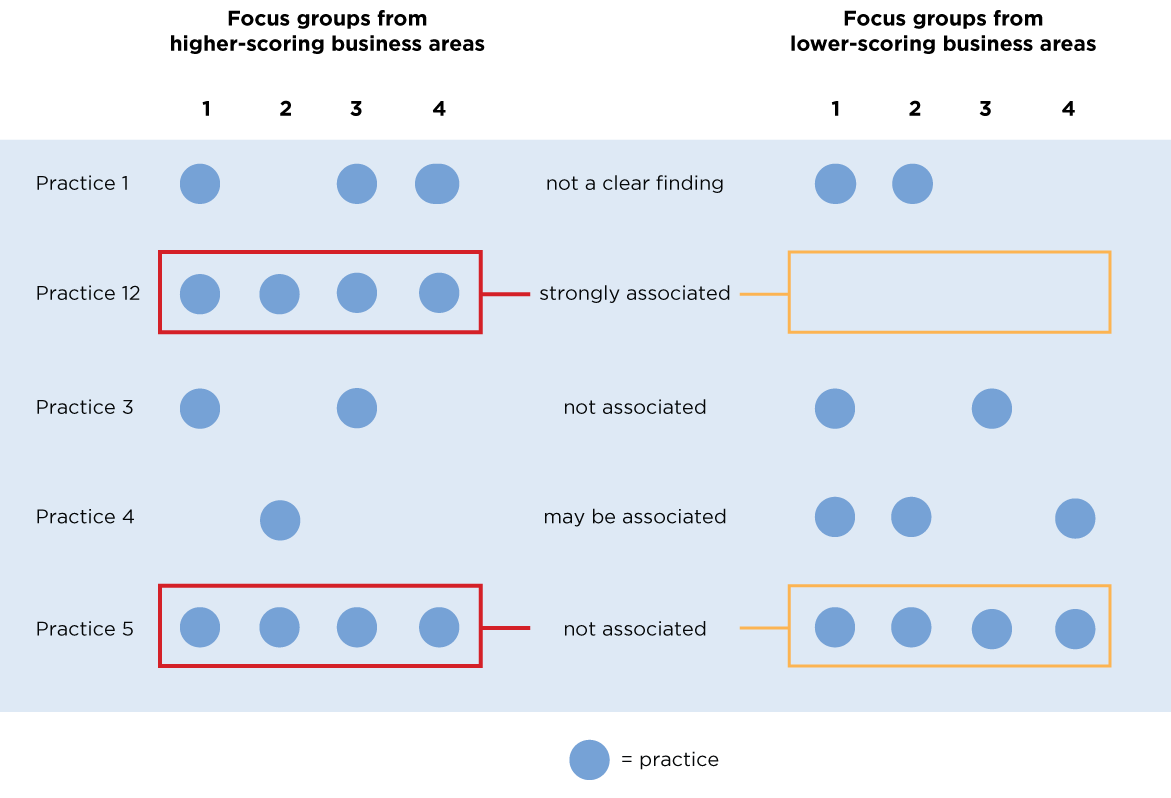 Using the grounded theory approach described in Box 1, we analysed evidence from 18 focus group discussions to try and identify what might distinguish business areas in firms where employees were more likely to say that there was equality of opportunity in their firm regardless of gender, from those where they were much less likely to do so. Figures 34 and 35 summarise the results.

Figure 34 shows codes and practices that were mentioned to different degrees in focus groups drawn from higher-scoring and lower-scoring business areas.

Employees from higher-scoring business areas, in contrast, were less likely to refer to gender inequality of opportunity as a banking sector problem and more likely to say that their own firms needed to do more. They were more likely to describe senior-sponsored initiatives at their firms to improve gender equality, and programmes designed to raise awareness of gender imbalances.

We may infer from this analysis that, where leaders are open with employees about the steps they are taking to promote equality of opportunity, this is likely to support more positive perceptions. This appears to be associated with senior leaders being seen to take personal responsibility for the challenge, and employees seeing it as an issue to be faced within their firm rather than excusing it as an industry problem.  Drawing attention to gender inequality as a problem for the firm, and being self-aware — self-critical, even — of the firm’s own progress, promotes confidence that the company has a greater commitment to equality of opportunity.

A relative lack of this self-awareness, self-criticism and senior-sponsored initiatives, by contrast, is associated not with gender equality being seen as less of an issue within the firm, but with employees seeing it as a greater problem.

Fig 34. Gender equality, frequency with which issues were mentioned in focus groups from higher and lower-scoring business areas in 2018 (differentiating factors) 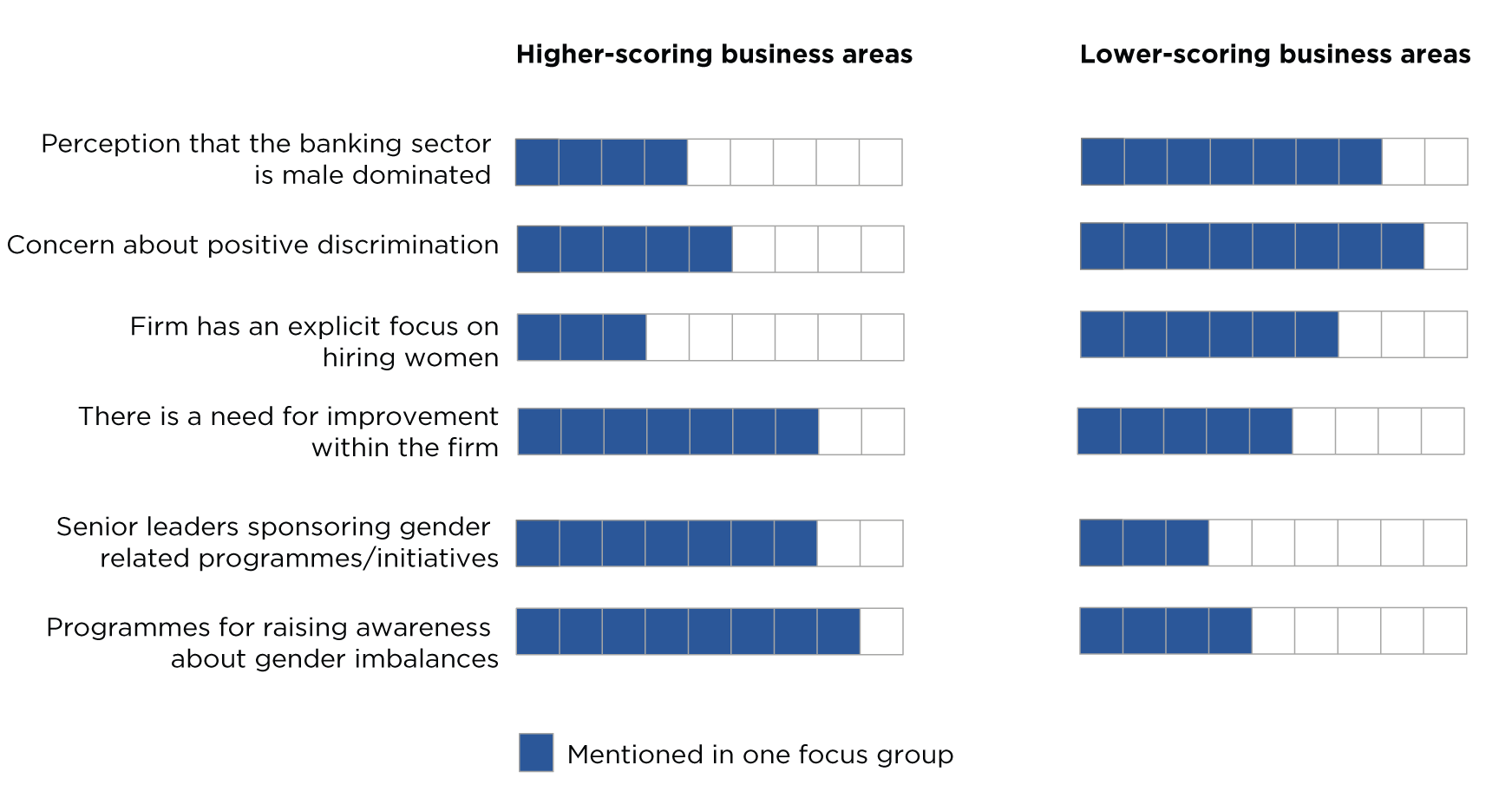 Some practices and characteristics were raised frequently by focus groups from both higher and lower-scoring business areas. While not of themselves sufficient to help explain differences in scores, they are nevertheless interesting in that they point, in this context, to shared challenges facing firms of all types in the banking sector on the issue of gender equality.

These shared challenges (figure 35) included the perception that taking maternity or paternity leave hindered career progression, the observation that policies to promote gender equality were applied inconsistently across the firm, and the sense that the firm’s own culture was itself a barrier to gender equality. Employees from most focus groups also noted the lack of women in senior positions.

Fig 35. Gender equality, frequency with which issues were mentioned in focus groups from higher and lower-scoring business areas in 2018 (shared factors)