The purpose of work: intrinsic motivations in banking

in News, Purpose
Reading Time: 4 mins read
A A
0

This essay was written by BSB Senior Behavioural Scientist Carol Franceschini and was originally published the FCA Discussion Paper on driving purposeful cultures.

A consistent body of research from behavioural economics and psychology suggests that employees from various industries, including banking, care about more than just their pay; they also see their work as a source of meaning.

Employees may obtain intrinsic incentives to work when they perceive that by helping the organisations achieve their corporate purpose is consistent with their own personal purpose, that by doing their jobs they are also contributing to better society.  Intrinsic factors complement the extrinsic incentives (e.g. remuneration), making employees more engaged and willing to go the ‘extra mile’ for customers and other stakeholders. Conversely, when personal and organisational purpose do not overlap, a job may be just a job, and performance becomes primarily a function of extrinsic factors (Akerlof & Kranton, 2005)

The ‘right’ balance between intrinsic and extrinsic motivation will differ between firms, sectors and individuals. Identifying it, however, is important for any organisation, and especially one intent on creating or maintaining a trustworthy culture. Over the period between 2016-2019, the proportion of banking employees who responded to the Banking Standards Board (BSB) annual Survey and said that the values and purposes of their organization are meaningful to them ranged between 81% and 85%.

In 2019, we set out to understand more about what exactly these values and purposes are. The extent to which employees see their jobs as meaningful has been shown to be in part linked to whether they can see that what they do has a positive impact on others (Ashraf & Bandiera, 2017). This will itself be influenced by whether these stakeholders communicate their appreciation by giving positive feedback that reaches employees. Based on this, we examined the perceptions that employees hold about both the positive and negative impact that their daily work has on others, the extent to which they feel valued by various stakeholders.

Among all firms that took part in the Survey, 69% of respondents felt that their work made a positive difference to others, with the most cited beneficiaries among all respondents being customers (66%) and work colleagues (61%). Smaller proportions also saw benefits for line managers, senior leaders, shareholders, the local community, families, and society at large.

15% saw a negative impact from their work – most frequently, on their families. We also asked employees whether they felt valued for the work they did.  77% said that they did, with internal stakeholders were by far the most common source of appreciation. 68% of all respondents referred to being valued by colleagues, and 66% by line managers. Customers were the third most frequently mentioned group, though by a much smaller proportion (39%). The proportion of employees who felt that they created positive benefits for external stakeholders such as customers, shareholders, the local community and society was, in each case, greater than the proportion of employees who felt valued by them. 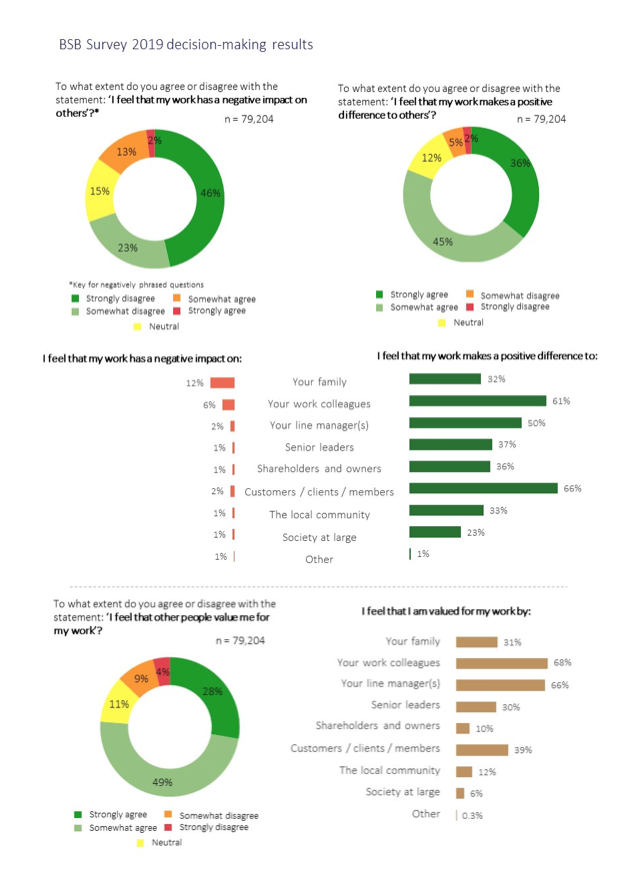 We examined the correlations between the responses to these three questions (positive and negative impact, plus feedback from others) and the 36 core questions on the BSB Survey. These core questions help boards assess how far their firm demonstrates  nine  characteristics that we would argue are likely to be associated with the behavior and motivation that leads to good outcomes for customers and clients – see ‘‘Is there a ‘right’ culture?” at https://www.fca.org.uk/publication/discussion/dp18-02.pdf, pg. 21. Employees who said that their work had a positive impact on others and who also felt valued by them were more likely to say that their firm responded effectively to staff feedback and that they were treated with respect. Those who felt that their work had a negative impact were more likely to disagree with these two statements.

Whether and how employees see their work as having an impact on customers and other stakeholders, and employees’ own experience within the firm (in particular, the responsiveness of the firm to employees’ views, and whether they are treated with respect), may therefore be linked or influenced by common factors. If so, questions that firms may wish to consider might include:

The perception that their work in banking is purposeful in the sense of contributing to better society requires, at a minimum, that employees actively see that they benefit others, and/or that their work does not have a negative impact on them. It also requires that stakeholders notice and appreciate such contributions. This new body of evidence suggests that many banking employees find that the purposes of their organisation overlaps with their own purposes of helping customers and other stakeholders. Many employees ‘see’ stakeholders being impacted by their daily decisions and feel ‘seen’ and valued by some of those impacted parties, but not by others.

Therefore, organisations may benefit from making such impacts more salient or encouraging employees to suggests new ways to improve what they do.

Ultimately, the success of an organisation in implementing its strategy, managing its risk and engaging with its customers, will rest in large part on the many decisions that each of its employees take every day. These decisions will both reflect and shape the organisational culture. Understanding how the personal purposes of banking employees interact with those of their organisation is important to any firm seeking to manage – and, if necessary, change – its culture, and ensure good outcomes for customers and clients.