in Diversity & inclusion, News
Reading Time: 5 mins read
A A
0

The Financial Industry has traditionally been seen as male-dominated, yet a 2019 study concluded that nearly half of the UK workforce in financial services was made up of women.[1]  A similar picture emerged through our findings from the 2020 FSCB Survey, however, the data also revealed that although the gender split appears somewhat balanced on the surface level, representation of women in higher hierarchical levels is still far from balanced. These gaps are even greater when ethnicity is taken into account. While only a snapshot in time, this data reveals that important differences can be concealed by the level of analysis. 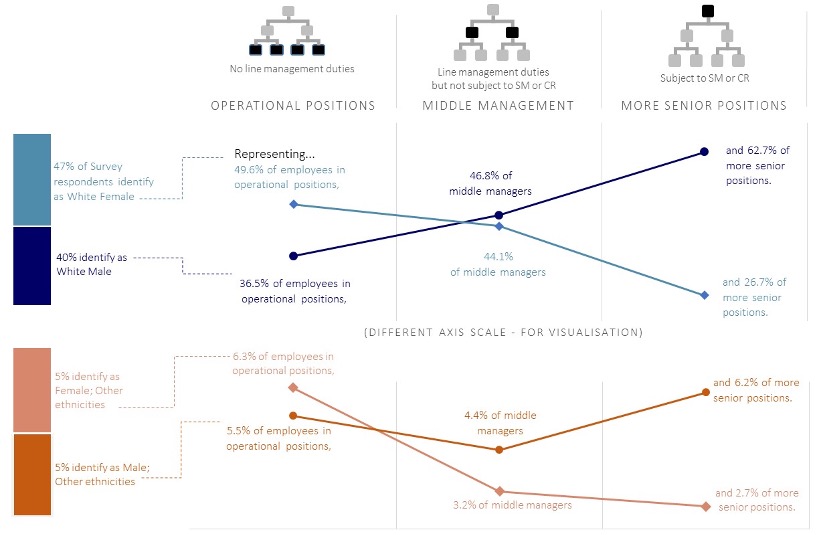 In our subset of all respondents from 31 UK banks and building societies who participated in the 2020 Employee Survey (see methodology below), we saw a near equal split on the overall gender distribution, slightly in favour of women. Just over half of our respondents identified as female, 46% as male, and a small proportion identified as other gender (e.g. non-binary). A similar balance was evident at the lower hierarchical levels of the organisations, where 56% of positions without line management responsibilities were occupied by women and 42% by men.

This balance, however, shifted as soon as we cross the threshold into positions with line management responsibilities. Slightly more than half (51%) of these positions were held by men, and slightly less than half (47%) by women. At the senior management level men occupied the clear majority of positions: roughly 70% compared to 30% women.

A realm of conscious and unconscious biases which affect how employees are evaluated and promoted in the workplace are now well documented [1][3] and likely drive continually disappointing statistics relating to gender equality in the workplace. Although some are now well known, they can still be hard to pinpoint and even harder to change. Through our Change Ambassadors programme and in collaboration with Dr Daniel Beunza and Dr Aneeta Rattan, the FSCB has been training employees in ethnographic techniques to observe and better understand how these biases and behaviours are manifest in day to day interactions in the workplace.

For example, certain patterns of behaviours may be recognised and rewarded more frequently when exhibited by a male employee than a female colleague [4][5]. The same behaviours may weigh more heavily for career progression when displayed by employees of white ethnic background than their colleagues from other ethnicities [2]. Unconscious stereotyping can mean that an employee is required to outperform their white male co-workers in order to be seen as equally competent [4].

Having a diverse and inclusive workplace is the right thing to do from a social perspective, and it’s also a prudent approach from both a commercial and regulatory perspective [6]. Incorporating different views into the governance, decision-making and product designing in financial services can help boost innovation and industry trustworthiness.

For more information about our work D&I and our future Change Ambassadors programmes please contact insightsteam@fscb.org.uk.

Methodology: How we came up with the data

There are around 410,000 employees working for banks and building societies in the UK[2]. In 2020, the (BSB) Survey was sent to more than 181,000 employees, covering 44% of the UK banking and building society population. We received 73,212 responses, and are confident that the responding sample are representative of the firms that took part. To understand the different experiences and perceptions of culture of different segments of the banking population, a series of optional demographic questions were asked. For this article, we only included responses from employees who provided four pieces of demographic information – gender, ethnicity, whether they had line management responsibilities or were subject to Senior Manager (SM) or Certification Regime (CR). This reduced our sample size from 73,212 to 49,114.